Chumming for Cobia, A to Z

One of the bright spots in Chesapeake Bay fishing in recent years has been the abundance of cobia. True, the season of 2021 wasn’t quite as hot as 2020. But it was still better for this species than it has been going back decades, from the southern sections of the Middle Bay right down to the point at which the Chesapeake meets the Atlantic Ocean. No matter where you want to give it a shot the upcoming cobia season of 2022 holds enormous promise, and there are few fisheries on the Chesapeake that get you a shot at an oceanic predator of rather monstrous potential proportions. In fact, cobia might just be the ultimate battlers of the Bay.

Most anglers target cobia by either chumming, trolling, or sight-casting. These are listed in order of ease and effectiveness on purpose. We’d agree that no way of catching a cobia can compare to sight-casting when it comes to the thrill-factor. And if you have all the appropriate gear and knowhow, trolling can be deadly. But for someone who doesn’t have loads of experience targeting these fish, their best path to initial success will likely be chumming.

Whether you’re in the vicinity of the red 72, Rappahannock Spit, or Latimer Shoals, where you position your boat is critical. Although these fish are spotted over deep waters by sight anglers, the best chumming hotspots are usually in a mere 15 to 25 feet of water. However, they’re also on the edges of drop-offs. So it’s usually best to anchor up in this depth range, but right on the edge of the drop to deeper water. That means that as the day progresses and winds or currents shift, you need to keep an eye on the fishfinder. Anchor up in 20 feet of water at the top of a steep shelf in some of the best areas, and when you swing on the anchor you might suddenly find yourself in 30 or more feet of water. Don’t let it ride — you need to pull the anchor, move back into the prime position, and re-set all the lines.

Ideally, it’s best if you can also position yourself so the chum slick will be disbursed along the shelf as opposed to going up or down it. This isn’t always possible as the wind and currents often conspire to ruin the best laid plans. And at other times, it means the wind will hold your boat facing in the wrong direction even if the chum’s going the right way. That can make it exceptionally difficult to keep out a full spread of lines without getting tangles or hooking your own anchor line. Try all the tricks you can to alleviate the issue: cut the wheel hard-over one way or the other to see if you can force the boat to swing a bit, use floats to get a line or two drifting back differently, and/or sling the anchor line around a spring cleat to cock the boat around if it’s safe to do so.

Rigging Up for Cobia

Nuts and bolts time, people! The bottom line is that you’ll need rigs that can deal with some seriously potent fish — a 40-inch cobia doesn’t fight like a 40-inch rockfish, it’s more like having a 50-plus-inch bull red on the line. Forty-pound gear is appropriate, 30-pound gear in topnotch condition with an experienced angler is minimal, and 20-pound gear is going to leave the average angler very, very frustrated. Conventional and spinning gear will both work, but spinning will work a lot better with reels that have a baitrunner function so you don’t have to fumble with the drag after a fish is on the line.

Leaders should be three to four feet of 50-pound fluorocarbon, which can be tied to a swivel or spider-hitched into a loop that can be clipped to a swivel. The end of the line gets a 10/0 circle hook. Unweighted mainlines can terminate with a ball-bearing swivel, while weighted lines get either a fishfinder rig or an egg sinker above the swivel.

One other critical piece of gear you’ll need is a cobia-competent net. (What about a gaff? The legality of gaffing cobia has been an on-again, off-again thing in Virginia, and as of last check was prohibited. Maryland regulations generally mirror Virginia’s for cobia but they do not appear to currently prohibit it). Once more we have to stress that cobia are not like other fish. Try to scoop one with the very same net you use all the time for 30-inch rockfish, and there’s a good chance it’ll swim right through the mesh and/or turn the hoop into a pretzel. In this case the term “heavy-duty” applies. The Norsemen Outdoors SS series are about the best I’ve found. I had an angry cobia destroy these, too, but I have yet to find a better built net. (Note: after the net destruction the company lived up to its lifetime guarantee and sent me a new one, and I still use it today).

Ground bunker chum for cobia should always be set just above the bottom, so you need to plan ahead and have a weighted bucket of some sort aboard. The best ones are easy to pop open for quick frozen chum chunk refills every hour or so. My personal favorite is an eel pot sealed off at the ends with chicken wire (which can be bent open on one end for reloading), because they work well and are sized perfectly for the pre-frozen chum logs many tackle shops carry.

Sink the chum pot down until it hits bottom, then pull it back up just a foot or two before cleating it off. WARNING: if a cobia wraps your chum bucket line during the fight, it’s usually game over. And these fish, especially larger specimens, simply cannot be controlled or directed through the water like most other species you’ll encounter in the Bay. So the moment you know you have a decent sized cobia on the line, assign someone the task of hauling that chum bucket up off the bottom and get it out of the water asap.

Some anglers like to set a second chum bucket at or near the surface. Feel free to give it a shot but I’d recommend only doing so when you’re positive there aren’t bluefish around. I abandoned this practice because it tends to attract blues in large and rather pesky numbers. The next thing you know your foot-long eels are all trimmed back to five or six inches, and it can become impossible to put fresh ones on the hook quickly enough to keep up.

Most cobia anglers will opt for setting out up to six lines. Having more in the water becomes quite chaotic when you hook up, and six allows you to thoroughly cover your bases. Adding more has diminishing returns and personally, I never set more than six and often set fewer than that (more on why later).

The lines are a mix of weighted and unweighted, live eels and bunker chunks. If live eels aren’t available live spot work well, too. Some anglers prefer to go with eels only since this greatly reduces the shark and ray factor, which can at times become exceedingly frustrating. Still, I’ll always have bunker in the mix because there are those odd days when for some strange reason the cobia all decide to eat the chunks yet eels go untouched.

A good mix is to sink two eels and two bunker chunks to the bottom. One of each should be weighted heavily and dropped close to straight down, and one of each should be weighted lightly enough that the current pulls it back a bit and affords some separation between the lines. These are best set with the reel in freespool with the clicker on. However, on rough days the weighted lines may need to have the drag engaged and set lightly or the bounce of the boat will constantly yank line out.

Unweighted lines get live eels, only. Give one a gentle heave, sweep the rod once or twice to let out some extra line, and sit it in a rocket launcher or elevated rodholder, angled out to the side if possible. Set the reel to freespool, clicker on (or put on the baitrunner, with a spinning reel).

Once those five lines are out you’re in the game, and at this point it’s best to sit back and watch for a moment or two before considering your next adjustment. If the wind and current are cooperating so that your lines all trail neatly aft (not likely), you can toss another unweighted eel off the other side of the boat to get to six lines. Of course, the wind and current may be diametrically opposed (the story of my life) and rather than adding a sixth line you’ll have to pull a problematic one or two and either reposition them or yank them out of the water until the current changes. 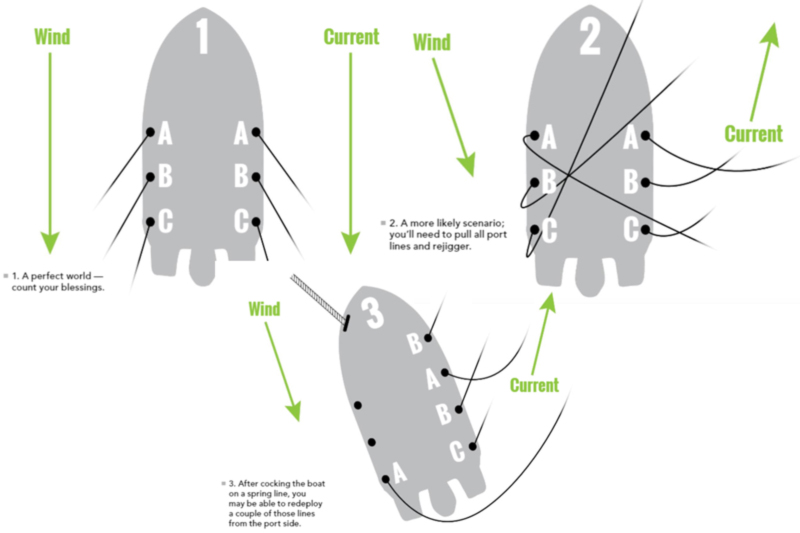 If any lines are being pulled such that they consistently touch the side of the boat or are in serious tangling danger with the anchor line, get ‘em out of the water. It’s better to have a few well-positioned lines in as opposed to a bunch of disasters waiting to happen — and you can bet that whatever line is in the worst spot is always the one that will get hit.

Remember people, cobia are simply not like other fish. Pound for pound they’re as strong as an ox. They’re entirely unpredictable. They wreck fishing gear with regularity. And catching one keeper-sized cobia is a major victory, especially if you go out and do it on your own — and if you want to give that a shot, chumming is your best chance for success.