Fall Specks in the Shallows

If you enjoy Chesapeake Bay fishing and you live anywhere between Philadelphia and Pungoteague, there’s a good chance you get fired up over the thought of casting for speckled sea trout in the shallows. In fact, fishermen as far flung as Florida feel exactly the same way. And while our speck season in Chesapeake country might not last as long as it does to the south, most falls we’ll get a good shot at skinny water specks throughout our region. Will this be one of those years when we enjoy awesome speckled trout fishing from the Middle Chesapeake down to the Bay’s juncture with the Atlantic? Will they only be found in decent numbers from the Tangier south? Or, will it be an off-year when the specks are tough to come by anywhere on the Bay? We can’t say for sure at this point, but we do know one thing: being a successful speckled trout angler requires targeting them in specific. Here’s how.

Where To Catch Speckled Sea Trout

Generally speaking, speck fishing in the Chesapeake will be better the farther south you go. Often in the fall it’s best near the mouth of the Bay in the Hampton and Cape Charles zones. But some years you can put together catches of a half-dozen or so fish in an afternoon as far north as Eastern Bay or even the Severn River. As a general rule of thumb, the southern Choptank/Tangier zone and down will be a good bet on the Eastern side and the lower Potomac and down will be best on the Western side. Keep tabs on the weekly fishing reports to see where they’re popping up in, but regardless of which general area you fish remember:

Finding specks requires finding an area they like to feed in, which means finding an area with structure, or current. The best-case scenario? Find a place with both. Quite often, this means focusing your efforts on points.

Points jutting from the shoreline commonly cause interruptions in the current, which in turn lead to rips, scours and holes. Find a point with a four or five-foot-deep hole off its end surrounded by two feet of moving water, and you’ve found prime speckled trout territory.

Cut to the Chase

Another shallow water environment speckled trout love are cuts and creeks. Again, there needs to be current in order for it to be a top-notch hotspot, but if you spend some time probing along the edges of a marsh casting to the mouths of cuts and creeks, you’ll be amazed at what you find. It’s not terribly unusual to cast into a cut no wider than your own boat, and hook into the best speck of the day.

Tip: if you see a creek with a very sharp bend not too far inside its mouth and there’s enough water to get up there, try casting to the outside edge of the bend and let your lure sink for a moment or two. Usually if there’s any serious flow to the creek, there will be a scour with slightly deeper water in that spot. Note, however, that these spots are usually inhabited by a lone fish or two. Once you’ve pulled a fattie out of a tight creek mouth and take a few follow-up casts, if no others strikes follow it’s time to move on. Also remember that it’s best to investigate marsh creeks and cuts towards the end of a high tide and into the early stages of a falling tide. On low water, they aren’t nearly as productive.

Second Tip: If you find a cut with strong current running between a tiny island and the mainland or marsh, you’ve probably found prime speck territory; such areas are well worth serious investigation.

Aside from these highlights, there are many forms of structure you’ll catch speckled trout from in the shallows. Grassbeds always deserve some attention, but don’t just blindly cast around them. The edges of the beds and grass-free “potholes” are where you’ll usually get your bites. One exception: very early and very late in the day, pulling topwater lures over a weedbed can sometimes produce rather exciting speckled trout explosions. Tree stumps are another good form of speck-structure, specifically the stump fields found in the Tangier and Pocomoke Sounds. And submerged rockpiles will also produce fish.

The bottom line? The best way to figure out where to cast for speckled sea trout in the shallows is simply to get out there, look for any and all of these scenarios, and spend some time flailing the water. After a couple-few trips out of any one specific launch point, tributary, or marina, you should have a healthy database of likely spots to work with.

How To Fish for Speckled Trout

Working shorelines, hopping from point to creek to grassbed and running when you encounter long stretches of blah-looking areas, is usually the top way to fish the shallows for specks. Obviously, a bow-mounted electric trolling motor is as valuable as gold for this style of fishing both for stealthy boat positioning and Minn Kota's Spot-Lock (GPS-enabled virtual anchoring). Having a remote you can wear around your neck while casting is even better – fish with an iPilot-equipped boat just once, and if your own fishing machine doesn’t have it you’ll be eating your heart out every time you fish the shallows henceforth.

Those of us who don’t have a bow-mount will have to do things the old-fashioned way, by starting a drift down-wind of the shore we want to work and using the outboard(s) to adjust position as necessary. Note: while many people feel shutting down the engine in-between adjustments is best, with a modern four-stroke it may do more harm than good. Four-strokes these days are amazingly quiet both above and below the waterline when idling, but an engaging starter does cause a potentially fish-spooking metal-on-metal noise which is significantly louder than mere idling. (Though if you have a blabbering, yammering, old-tech two-stroke, yeah, cut that thing off whenever possible).

When you get into a hot zone, you may want to stay put for a while. Although not commonly thought of as a schooling fish, especially at relatively large holes and points specks can often be found in decent numbers. If your trolling motor has Spot-Lock you’re set. You might also be lucky enough to have a pole-style shallow water anchor. Otherwise, this means sliding an anchor over the side. That doesn’t help with the noise factor, so be especially careful to do it as stealthily as possible. And while we’re on that topic, remember that dragging a tacklebox across the deck, slamming a hatch, or even talking loudly can be enough to shut off a shallow water bite like someone flipped a light-switch.

Most anglers working the shallows for specks these days employ soft plastics, and possibly topwater at daybreak and/or nightfall. Common choices usually include three to five inch svelte-profile shad tails, paddle tails, twisters, and similar lures. Go-to color choices include white, pearl, chartreuse, and contrasting body/tail combinations. One specific thing to keep in mind, however, is that speckled sea trout sometimes go nuts for bubble-gum pink. Be sure to give it a try; naturally several factors like water conditions and prevalent prey can make a difference, but as a rule of thumb it often produces more strikes than any other one color for specks in specific.

Fishing the shallows often requires down-sizing some of the other gear you may be used to slinging. Quarter-ounce heads are usually more than enough weight and a half-ounce may be too much. In any case, when casting you’ll likely need to engage the reel the very moment the lure splashes down, begin cranking immediately, and keep your tip high to avoid snags or grass. As the lure comes off the shoreline, you may want to bring the tip down and/or slow the retrieve a bit to work it slightly deeper.

Another option is to fish bait, though many light-tackle aficionados eschew this method. Fine – stick your nose in the air, but it can be incredibly effective at certain times. Drifting a soft or peeler crab chunk through a likely speck spot will, at times, out-catch the best lures around.

We can’t say if those specks will be present in huge numbers around the Lower Bay this month. We can’t say if they’ll invade the Tangier. And we can’t predict if they’ll swim all the way up into the waters of the Middle Bay. But we can say one thing for sure: a speck hunt is a sure-fire way to get an angler charged up, and if you apply these tactics and techniques there’s a good chance your hunt will be downright speck-tacular.

Want more site-specific information on how to target speckled sea trout in the HRBT/Hampton area and surrounding waters, including some spots for yak and shoreline angling? Check out How to Catch Autumn Speckled Sea Trout, by our Hampton Correspondent Chuck Harrison. And for intel on fishing for specks in the shallows year-round, see How to Catch Speckled Trout in the Shallows, by Capt. “Walleye” Pete Dahlberg. 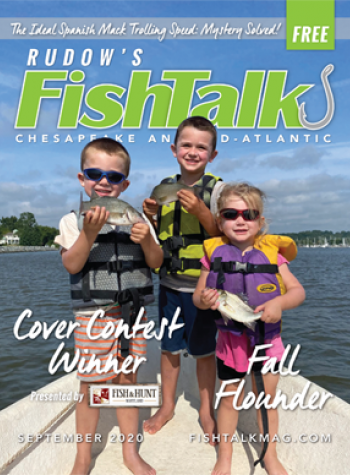