How to Catch Spring Trout

Trout fishing in the spring is alluring in every way, whether you're thinking about loading a stringer with stocked rainbow trout from a local pond or chasing the wild trout of the Gunpowder. Every year along around the beginning of spring, I get this very uneasy feeling. It has to do with making decisions… the right ones. Do I try for bass at local small lakes, tidal blue catfish on the Potomac, or perhaps delicious crappie from the local reservoirs? How about Eastern Shore variety, with pickerel and snakeheads in the mix? The options are many, but in recent years I’ve more often made the decision to target the many freshwater trout fishing venues that are available to Maryland and southern Pennsylvania anglers each spring. Especially during the grips of a cold, slow-progressing spring, trout often fit the bill perfectly for those who have waited patiently all winter to finally get out and do some fishing.That's one reason why this spring, we headed for the trout pond to shoot a video on Float 'N Fly techniques, which are deadly on stocked trout.

The trout fishery in our region may not be the wild, pristine adventure that one might have in Montana, but it’s not meant to be. But for thousands of eager trout fishermen it offers a long-awaited shot at fish that are fun, full of fight, and taste good in the pan. Here’s an overview of successful tactics for spring trout.

Easily the most effective method to taking a limit of stocked trout is with the use of the many baits and pastes on todays’ market. Among the leaders are the lineup of Berkley Power Baits, Worms, and Nuggets. With a diverse selection to choose from one might scratch their head when trying to decide which is best: there are solid colors of the dough baits, sparkle options, multi-colored varieties, and simple flavors that are jarred in nugget form. One of my favorites is the Trout Powerworms in pink and orange, which I like to fish on a 1/64th ounce jighead below a bobber. Fish strike these worms willingly, and fished with a jighead you almost always have the fish hooked in the jaw rather than the customary swallowing of hooks as often happens with dough- or paste-style baits.

Since a large majority of spring trout fishing is focused on put-and-take (code: catch and keep) angling, expect most fish to swallow the small hooks that are used for this style of fishing. We like single, baitholder style hooks in sizes 10 to 14 when using dough, and cover the hook with a small dough-ball of bait. A slip-shot or two 16-inches above four- to six-pound test monofilament completes a simple rig that will take stockies under many situations. Used with ultralight spinning gear, you can allow these baits to lie on the bottom and set the hook once a fish has picked up your bait and moved off.

Salmon eggs can also be a great bait, but tend to come off of the tiny number 14 hooks easily. You can fish them in the same way with the PowerBait products and they are equally effective in moving or stillwater environments. Again, many flavor enhancements and colors are available at the many big-box sporting stores. And it’s good to keep these baits around, because both Pautzke and Mikes salmon egg products have produced well for us when other options didn’t.

Spoons and Spinners for Trout Fishing

An enjoyable method for spring trout is chucking spoons and spinners for active fish that pounce on a metal bait with surprising force. The market is loaded with many such options, but a favorite would be a Panther Martin spoons in sizes 1 and 2. Colors vary greatly, but most bases can be covered with gold, silver and copper-colored hues that imitate a variety of baitfish tones. With aggressive fish, a straight, steady retrieve will catch a lot and it pays to vary the speed of the retrieve as some days fish will appear lethargic and ignore a faster pace. Some anglers like to tip the treble hook with a plastic trailer, curly-tail grub or a piece of PowerWorm for added enticement. There are days when this will make the difference between a limit of trout or none at all.

Spoons offer their own unique spot in the spring trout gig. The wobbling, back-and-forth motion is very different from the straight spiraling of spinners, and their added weight enables longer casts from bank-fishing venues to where feeding trout cruise. We like classic spoons such as the KastMasters in size 1/12th to 1/8th ounce, Swedish Pimples in 1/10th and 1/16th ounce, and Blue Fox Flash Spoons in 1/16th and 1/8th of an ounce. Additionally, the time-honored Super-Duper, with its thin, U-shaped dynamic, can sometimes be the bomb on spring trout that get picky.

One cool thing about spoons is that they are endless in colors and finishes. We have had success in the past with rainbow patterns, red and white combos, chartreuse, and even bright orange. They cast like a bullet and can be fished deeper than other hardware when trout are hugging the bottom. Although many anglers use the standard treble hooks that come with these lures, better hookup ratios are acquired when they are replaced with single hooks that sometimes come with these spoons. Again, a plastic or PowerWorm tipper can often trigger strikes on a slow day.

A few years ago, and quite by accident, I discovered the spinfisherman’s version to the fly angler’s “indicator nymph” technique – simply, the float and fly tactic scaled down to the trout’s world. I had fished several stocked trout ponds in Maryland and Pennsylvania and tried drifting tiny 1/64th ounce jigs for bluegills and crappies, after the trout refused standard approaches. To my amazement the trout turned on, showing great favor to any tiny buggy imitation after ignoring hardware and bait. Over time, I relied more and more on micro-jigs as my “go to” tactic for not only hatchery stocked trout, but giant fish as well.

I quickly noticed that thin wire hooks on standard bluegill jigs just wouldn’t hold the weight of trout exceeding 20-inches or more. So, I went online and bought some micros from Chuck and Deb’s Tackle that had stronger, heavier gauge hooks that would hold up under the battle of bigger fish. Dark olive, brown, and black and chartreuse patterns seemed to catch the most fish, but now and again they would favor a light brown or beige pattern. Eventually, I started tying bead-head nymphs that I simply fished on a tiny foam bobber, adjusting the depth below the float until I encountered the fish. It’s a great way to cover a lot of water and often the chop on the surface is all that’s needed to entice a strike.

One important factor with the trout float and fly gig is to maintain constant eye contact on your float, bobber, or indicator, whatever you choose to call it. Usually, it will plummet and a straight-line hookset ensures a solid hookup. I prefer a longer, 7.5-foot Diawa Presso spinning rod for this fishing as the longer stick aids in hooksets and helps control bigger fish. Quality two- to four-pound mono is paramount for success, with clear or green being the preferred line color.

Where permitted, the float and fly trout rig works well in stream scenarios as well, especially with early spring stocked fish. But this technique is particularly deadly on lake and pond fish where they’re cruising at specific depths and actively feeding. Size seems to be more important than exact color variations when jigging, but keep a variety so you can cover all the bases when they get picky.

Both Maryland and Pennsylvania stock and manage lakes, ponds and streams with rainbow, brown, brook, and golden (palomino) trout. Regulations vary from one creek, pond, or river to another, so it pays to check the regulations. Follow the links to find the stocking schedules and regulations for Quaker State waters; for Maryland visit their DNR webpage.

-By Jim Gronaw, author of The Gospel According to Bluegills. ($14.95, Email [email protected] to learn more or get your copy). 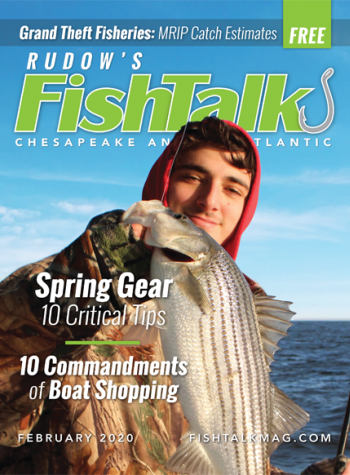