You can see the rip-rapped shoreline at Thomas Point and the rocks around the lighthouse are also impossible to miss—but that means you only know about two out of five awesome spots to fish here, and these are the same two everyone else knows about. You want to learn of the other three hotspots? The ones that aren’t easy to spot, or heavily pressured? Then let’s take a closer look at Thomas Point, and examine all five hot zones in detail.

Let’s start with the obvious, the rocks around Thomas Point lighthouse. These are excellent early in the morning and late in the evening. But since everyone and their brother can see these rocks, they get hit as much as any spot in the middle bay. In fact, if you spend an afternoon jigging or chumming near by, you can watch boat after boat after boat pull up and cast to the rocks. So treat this spot as a good possibility early and late, but don’t plan on hitting it mid-day.

You can get within casting distance of the rocks on all sides, and the pier on the western side of the rock pile is also a good place to cast. Toss your lures in close and give them a lively retrieve. Most of the fish, however, will come from the eastern side of the rock pile (focus on the area where the northernmost leg of the lighthouse abuts the rocks) and the northern tip near the ice breaker. Casting between the rocks and the ice breaker is also a good bet.

Rockfish in the Rips

Anyone who’s tried to run across the bar about a quarter mile off the shore, north of the point and 100 to 200 yards south of the red #2 marker at low tide, may have a painfully accurate idea of why we'll call this hotspot the “prop-killer”. There are scattered rocks here and at low tide there will be only about a foot of water over them. These rocks don’t really rise up off the bottom, so much as cover it. In fact, come into this area on an extremely low tide during times of relatively clear water, and when you see the rocks, they’ll remind you of a very uneven cobblestone paved road with some extra stones scattered around at either end.

During the summer months you can often locate good numbers of 16” to 26” fish here, and late in the fall there’s often a stretch of a week to a month where larger fish move in and hold around these rocks. Since the rocks are on the north side of the bar, fishing here is usually at its best here during an outgoing tide.

The Rips at the Point

Up close to the point, from 30 to 70 yards from land, is an underwater minefield of scattered rocks and rockpiles. These come close enough to the surface to create a visible rip when the tide’s running, but it’s rare that the water gets low enough to actually see the rocks coming out of the water. These rocks are fairly well known by locals and if you get here more than half an hour after sunrise, chances are someone else will have beaten you to the spot or that shoreline anglers will be casting to it. It’s tight, and I personally feel this spot is only large enough to support two boats. If you see people fishing it from shore, courtesy demands that you move on  to a different spot.

This spot is usually best during the outgoing tide, although incoming tides will produce some fish, too. You’ll usually find larger numbers of smaller fish here early in the season then a large class of fish often moves in late in the year. Some seasons, they’ll stick around right through December.

The north side of the point itself is another visible area that often produces good numbers of fish. You can putt in close to shore here, and you’ll discover a nice drop-off which continues for 60 or 70 yards as you work your way westward along the rip-rap. Most of the fish caught here will be on the smaller side, from 14” to 20”, but sometimes a strong number of bites and fast action makes up for the lack of significant size. One problem: if shoreline anglers are present, it’s best to leave the spot alone. You can run anywhere on the bay, and these guys are stuck in one spot—so leave it to them. A note to shoreline anglers: in case you hadn’t noticed it yet, Thomas Point is a great spot for you! You will, however, need to plan ahead. The park isn’t open pre- and post-dawn, and parking permits are required during different times. To get the scoop on exactly when, where, and how you can fish here, call 410/222-1777.

There’s no marsh here so the name seems a bit out of kilter, but there most certainly is a point—and it often holds larger numbers of schoolie-sized fish, though stripers over 20” are a rarity here. It’s best on an outgoing tide, and it should be noted that 10 or 12 years ago flounder moved up along this point in good numbers and during flood tides it was possible to catch several nice flatties by bouncing your jigs along the bottom right next to the shore. This hasn’t happened in years now, but who knows, maybe the flounder will return to this section of the bay. If they do, remember to try casting for them here. One final note: there’s shallow water all around this point, and at a low tide, it may be unapproachable by everyone except kayak anglers. 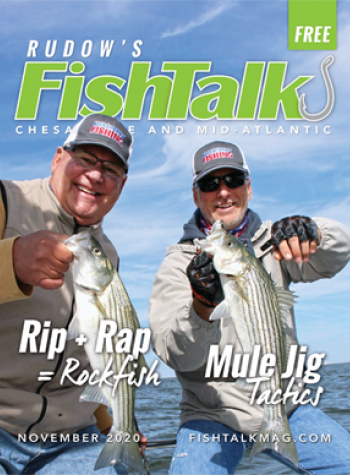